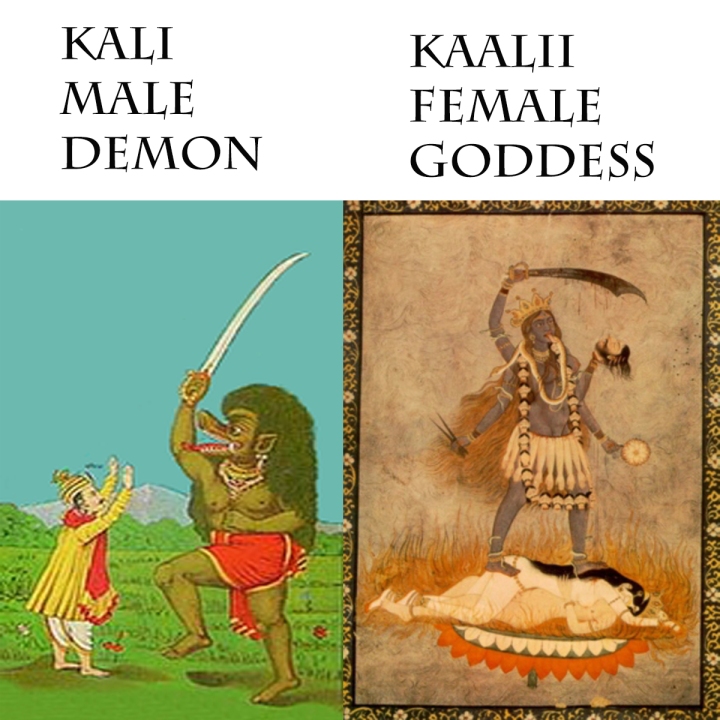 “It is a common misconception that the Kali Yuga is named after the Goddess Kālī. Instead it takes its name from an extremely powerful male demon. This mistake occurs due to errors in English translations of the name Kali – in Sanskrit the Goddess is named Kālī (with long vowels) – the name of the demon is spelt Kali (with short vowels). The demonic Kali takes his name from the Sanskrit root kad which means to “suffer, grieve, hurt, confound, or confuse”. Kali is the arch enemy of Kalki, the 10th avatar of the God Viṣṇu. When Viṣṇu incarnates as an avatar, so does Kali – in the Mahābhārata he is said to be Duryodhana, and in the Rāmāyaṇa he is Rāvaṇa. Kali is the great-great-grandson of Lord Brahmā, as well as Adharma who was originally created from Lord Brahmā’s back as a Maleen Pataka (a sinful object). This is found in the Śrī Kalki Purāṇa where it says that “After the annihilation, the secondary creator of the universe, Lord Brahmā, the grandfather of everyone, who was born on the universal lotus flower, created Sin personified, having a black complexion, from his back.” An alternate version of Kali’s origin states that he was born from the left-over poison that was drunk by Lord Śiva during the churning of the ocean of milk.” – Gwendolyn Taunton (forthcoming article).